Drug-induced LQTS is often caused by direct blockade of the cardiac potassium channel hERG by a wide variety of structurally diverse therapeutic compounds. For some compounds it was shown that certain substances produced their effects not by direct block of cardiac ion channels, but indirectly, by inhibiting the processing of channel protein in the endoplasmic reticulum and reducing the surface expression of ion channels (Ficker et al 2004).

Trafficking effects can not be analyzed by acute electrophysiological experiments but by analysis of the current density of compound treated cells expressing the hERG channel and via proteinbiochemical methods. 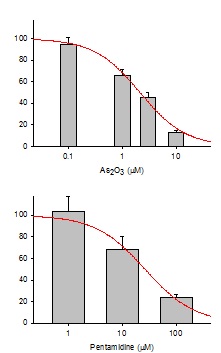